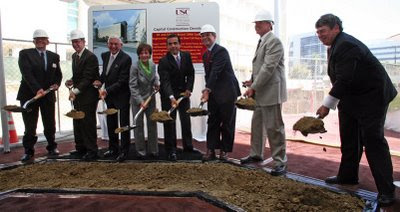 Rattling around in the background is an extremely low profile discussion of naming protocols for structures financed by CIRM, including a comment from one CIRM director that she hates the term CIRM.

In case you missed the USC event, it occurred Sept. 4 with considerable institutional ballyhoo, but also some media coverage. The Los Angeles Times, which rarely writes about CIRM affairs despite being the largest newspaper in the state, recorded the ceremonies along with some television coverage, based on what can be found at the USC web site.

CIRM Chairman Robert Klein and CIRM President Alan Trounson were on hand (see USC photo above with Klein in tan suit and Trounson on far right) to heft two finely polished shovels. But the man of the hour was Eli Broad (the white-haired man next to the woman), whose foundation popped for $30 million for the facility, which will cost a total of $80 million. California taxpayers, via CIRM, added $27 million. USC said the remainder will come from other individuals and foundations.

The 80,000-square-foot structure will be formally called the Eli and Edythe Broad CIRM Center for Regenerative Medicine and Stem Cell Research, but it is impossible to tell right now how it will be referred to on a regular basis by its users.

CIRM has more than a casual interest in the naming of buildings it helps to finance. The stem cell agency requires that institutions secure the agency's approval. Don Gibbons, chief communications officer, told CIRM directors that the USC name will not be official until the directors approve it at their meeting later this month. The naming protocol is also of substantial interest to the institutions that want to recognize individuals or foundations that make hefty contributions, including ones that exceed CIRM funding.

Last month, Gibbons discussed the phrasing used by USC and also language proposed by UC Davis. UCD plans to use "California Institute for Regenerative Medicine" as a subscript on the name of its stem cell research lab.

On a straw vote last month, directors indicated that they favored both methods, but not before a brief discussion of whether CIRM is a "very good brand" or whether the "California Institute for Regenerative Medicine" is better. The question seemed to revolve around whether the public would understand that both names indicated that cash came from the California stem cell agency.

CIRM Director Joan Samuelson said the CIRM abbreviation had bothered her for a long time.She said,

She said CIRM "means absolutely nothing to the public," which is financing the stem cell effort.

"CIRM just doesn't mean anything," Samuelson said, suggesting it would be "lovely" to name buildings after people who are suffering.

Our take: The public does not know what CIRM is, nor does it know what the California Institute for Regenerative Medicine is. High profile public recognition is not likely to occur short of a huge scandal or an incredible research breakthrough. The difficulty with both expressions is that neither says stem cell research. That is the main reason we initially refer in our items to the California stem cell agency. No confusion there.
Posted by David Jensen at 12:30 PM