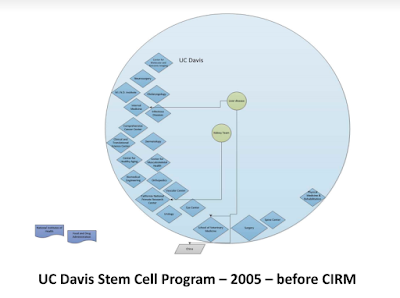 The head of the stem cell program at UC Davis says California is leading the way into a "new era of living medicine," thanks to the efforts of the $3 billion state stem cell agency.

Jan Nolta, the stem cell chief at Davis,  told the Assembly Select Committee on Biotechnology last week that the demise of the agency would lead to what some in her program are calling "cirm-amageddon," a play on the word armageddon and the initials of the stem cell agency's formal name..

The nearly 14-year-old agency is officially known as the California Institute for Regenerative Medicine (CIRM). It expects to run out of cash for new awards at the end of next year. CIRM is pinning its hopes for survival on yet-to-be-written ballot measure that would give it another $5 billion in state bonds if voters approve it in November 2020.

Nolta told lawmakers about the specialized facilities that are needed to deliver "living medicines" and highlighted the growth of the UC Davis stem cell program, which was virtually non-existent in 2004 when the agency was created.

Since then Davis has received $138 million from CIRM and has 24 stem cell trials underway "thanks to CIRM."

Nolta was lured to California after the passage of the ballot measure creating the agency. She said that the agency's programs have been a big draw for scientists from throughout the nation.

"If you want to do stem cells, this is where you come."

The full hearing can be seen here and downloaded. Nolta's remarks begin at 1:26:19 into the video (she spoke without a prepared text). An audio file is also available at the same URL.

Here are links to the remarks at the hearing by CIRM CEO Maria Millan, CIRM Vice Chair Art Torres, patient advocate Don Reed and David Jensen, publisher of this web site. Tomorrow the California Stem Cell Report will carry an item on the remarks of the father of an infant whose life was saved as the result of a clinical trial supported by CIRM. (This story has been postponed until Aug. 27.)
Posted by David Jensen at 6:36 AM