The 'Renegade Outposts' of the Stem Cell Industry: A Sweeping Examination by the SF Chronicle 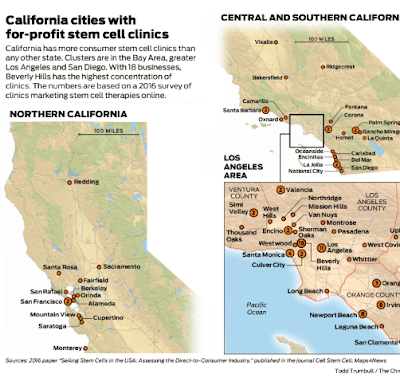 "Merchants of hope" was the headline today on a lengthy look by the San Francisco Chronicle at what it called the flourishing but costly, unproven and largely unregulated stem cell clinics in the United States and California.


"They are renegade outposts operating with little legitimacy and oversight at the frontier of what is otherwise a highly promising field of medicine."

It was the second installment in the Chronicle's look at stem cell treatments, both dubious and not-so-dubious. The first was published last month.

Today's piece took a lengthier look at the dubious efforts than has been done in other recent,  mainstream media examinations of the field, which is drawing increasing scrutiny from federal regulators. Allday wrote,


"None of the treatments the clinics offer have been shown to be safe or effective. None have been approved by the FDA. They’re not backed by decades of laboratory and animal studies or by rigorous testing in humans.

"Yet for many patients desperate for care, these clinics fill the void between the long-anticipated potential and the real-world limitations of stem cells. They cater to people whose needs reach beyond the powers of current medicine — people who want to believe in the almost mythic powers of stem cells, who feel corporate health and science have forsaken them.

"People who turn instead to these merchants of hope."

"The California Institute for Regenerative Medicine (CIRM) — the state agency created by Proposition 71 in 2004 to fund stem cell research — has raised concerns about the thriving consumer therapy market. CIRM officials and many of the scientists they fund worry that the selling of unproven treatments could undermine their own work and cast doubt on the enormous potential of regenerative medicine."

"'It really hurt our recruitment,' said Jane Lebkowski, president of research and development at Regenerative Patch Technologies in Portola Valley. 'We got a lot of questions: What happened in Florida? Am I going to go blind too?'

"Most patients, Lebkowski noted, don’t understand the difference between the fat stem cells that a for-profit clinic is using and the complex product her company is developing, which uses embryonic stem cells to develop a kind of retinal cell that’s damaged in macular degeneration.

"That’s part of the reason why scientists like Lebkowski and organizations like CIRM, which gave $17 million to the Regenerative Patch trial, have pressured the FDA to crack down on the consumer market."

The next installment in the series will deal with stem cell research and is scheduled for publication Aug. 16.
Posted by David Jensen at 8:43 AM