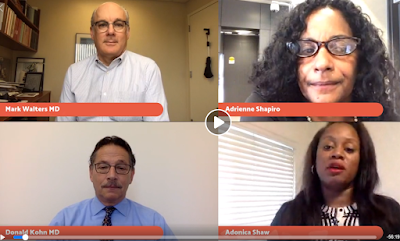 In August, the stem cell agency staged a live event on Facebook dealing  with
the current state of sickle cell research. It has since received  more than 2,200
page views. Here is a link to the event, which featured  Don Kohn of  UCLA  and
Mark Walters of UCSF Benioff Children’s Hospital.

California's stem cell agency has embarked on what it calls a "remarkable" collaboration with the federal government aimed at developing cell-based and gene-based therapies for sickle cell disease, which affects 100,000 persons nationwide.

The partnership marks the first time that the state agency has partnered directly with the National Institutes of Health(NIH), which spend $100 million a year on sickle cell research.

The affliction is caused by a genetic defect that deprives the body of oxygen, "wreaks havoc on the body, damaging organs, causing severe pain, and potentially leading to premature death," says the NIH.

In the agreement (see below) with California's $3 billion stem cell agency, the NIH said that the agency is "a recognized leader in the development and funding of clinical trials focused on cell-based therapies and is now working to accelerate support for clinical stage candidate treatments that demonstrate scientific excellence."

Millan told directors in in June that the arrangement amounted to a "quite remarkable" recognition of CIRM's capabilities. She said the NIH "made a decision that they needed to partner with us in order to have the best shot at accomplishing what they want to do with this 'cure sickle cell initiative.'"

On Thursday, directors of the California Institute for Regenerative Medicine (CIRM), as the agency is formally known, will receive a more complete briefing about the full range of CIRM's involvement.

CIRM will handle the funding processes for the applications for the late stage research program, making funding decisions in as little as 85 days. The agency's work will include scientific peer review, contracting and post-award management, according to CIRM documents. (The documents are part of the presentation that can be found here.)

Millan said that the NIH has recognized the agency's value in terms of accelerating development therapies, building late development research and translating basic research into clinical use.

The agency said it will provide funding on approved awards for work done in California, according to CIRM rules. It will have the ability, in consultation with the NIH,  to suspend or terminate research if milestones are missed, including taking back unused funds. Kevin McCormack, a spokesman for the agency, said that it will be compensated by the NIH for additional work that it has to perform but that details are yet to be worked out..

Last month, the NIH said in a news release:

"The Cure Sickle Cell Initiative seeks to develop cures for a far broader group of individuals with the disease, and it is initially focusing on gene therapies that modify the patient’s own hematopoietic stem cells (HSCs), which make red and other blood cells. These modified HSCs can then be given back to the patient via a bone marrow transplant, making a cure available to more patients who lack a matched donor."

Below is a CIRM video on sickle cell disease and a copy of the agreement between the stem cell agency and the NIH.

(Editor's note: An earlier version of this item incorrectly reported that the agency had committed more than $200 million to sickle cell research, based on inaccurate figures on the CIRM web site. The correct amount is $38,8 million. CIRM said the error was created by a computer glitch and that it has corrected the figures on its site.)

Sickle Cell Cirm-nhlbi Mou ... by on Scribd
Posted by David Jensen at 2:07 PM