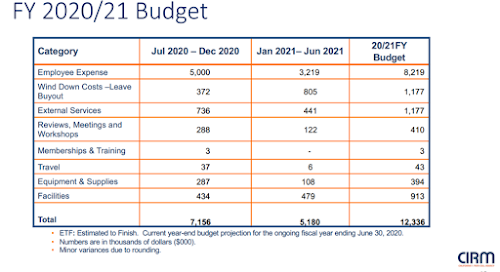 The $3 billion California stem cell agency has put together a "wind down" budget for its coming fiscal year -- a spending plan that takes into account the possibility that voters will not refinance the effort with more billions this fall.
The budget was approved by the agency's governing board finance committee last week. It proposes spending $12.3 million for the 12 months that begin July 1. Should voters reject a $5.5 billion refinancing of the agency in November, the plan anticipates a 42 percent staff reduction at the end of this year.
The agency is now down to 33 employees, who have numbered more than 50 in past years.
Maria Millan, CEO of the California Institute for Regenerative Medicine (CIRM), as the agency is formally known, said that details of the plan will be fleshed out as the year progresses.  It will also be discussed at a governing board meeting on June 26.
She said that CIRM has $854 million in awards under current management. They would be phased out over the next several years. Millan said that $47 million is available currently for research awards. Decisions on the use of the money will come before the board, also on June 26.
If the ballot measure is approved, the agency's budget will require substantial modification and hiring to deal with the increased funding and new activities provided for in the ballot measure.
During the public comment period, David Jensen, publisher of the California Stem Cell Report noted the  significance of CIRM both as an historic state enterprise and for its scientific impact on the stem cell field. He said,

"Preserving the CIRM story digitally in a readable and accessible format should not be all that costly. And it would be a significant contribution to helping those who come after us learn about how this $3 billion effort came about and navigated with considerable success through the early days of what some may ultimately call the stem cell revolution. It would be a sad day if the complete record of the California Institute for Regenerative Medicine is not preserved for posterity."

Several CIRM board members expressed enthusiasm for the suggestion. Millan said that archiving the data and information that CIRM has gathered is part of the wind down proposal under its public communication component. 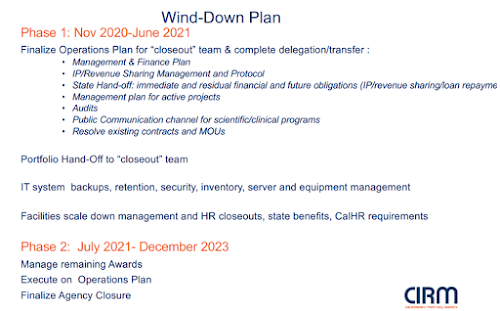 *This item has been brought to you by The California Stem Cell Report: The only independent source of information and news devoted solely to the stem cell agency for the last 15 years.*
Posted by David Jensen at 2:00 AM