The stem cell folks at UC Irvine on Friday officially unveiled their new research facility, which was pushed along by a $27.2 million grant from the California stem cell agency.

The structure cost $80 million in all. An additional $10 million came from Bill and Sue Gross, with the remainder from the UC system and private funding. Gross co-founded PIMCO, a well-regarded bond fund management company. 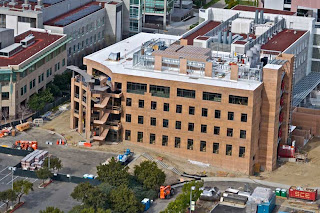 Joseph Serna wrote about the facility for the Los Angeles Times, which rarely covers CIRM activities, noting that UCLA and USC also received support from CIRM, $19.9 million and $27 million respectively. Irvine's building will house more than 60 researchers in a dozen labs. Peter Donovan, late of John Hopkins, is head of the UC Irvine stem cell program.


"With this, it's not just California speaking. This is tangible evidence that the science is at a world-class level. California is now the world leader in stem cell research and biomedical research."

The event did not trigger much in the way of media coverage, but an earlier Irvine announcement led to a number of stories including this on May 8 by China's Xinhua news agency:

“The center, run by the University of California in Irvine (UCI) near Los Angeles, is the first major stem cell research facility in the region, the UCI said in a statement.”

Obviously, that language could lead to a serious misunderstanding elsewhere in the world about the scope of stem cell research in California.
Posted by David Jensen at 9:15 AM