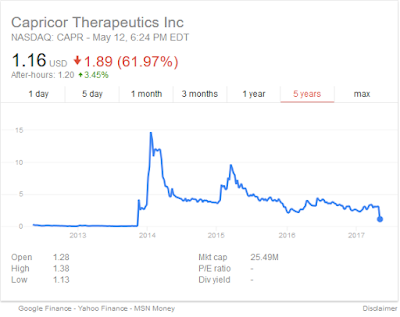 Capricor Therapeutics, Inc., today announced some bad news about its state-of-California financed clinical trial for a cardiac, stem cell therapy and said that it planned to lay off an unspecified number of employees.

Capricor's stock price plummeted 62 percent following what the company called the "unexpected" news, dropping from $1.89 to $1.16. California's stem cell agency has backed the trial with $20 million, plus an additional $7 million for earlier, related research.

The agency, formally known as the California Institute for Regenerative Medicine (CIRM), said on its blog,


"Obviously this is disappointing news for everyone involved, but we know that not all clinical trials are going to be successful. CIRM supported this research because it clearly addressed an unmet medical need and because an earlier Phase 1 study had showed promise in helping prevent decline in heart function after a heart attack."

In response to a question, Kevin McCormack, senior director of communications, said the agency is talking to Capricor about the next steps. The agency regularly halts funding of awards when recipients do not meet milestones. McCormack did not respond to a question about how much money the firm had already received from CIRM.

Capricor, which is headquartered in Beverly Hills, said in a press release that an interim analysis on the phase two trial has "has demonstrated a low probability (futility) of achieving a statistically-significant difference in the 12-month primary efficacy endpoint." The company said there was "no notable difference" between treatment groups.

The company said it would cut its workforce to focus more sharply on its treatment of Duchenne muscular dystrophy, which the stem cell agency is also backing with $3.4 million. The Duchenne treatment had better news the last month, clearing its phase one trial with no adverse effects.

Timothy Henry and Rajenda Makkar of the Cedars-Sinai Heart Institute in Los Angeles are the principal investigators for the clinical trial.