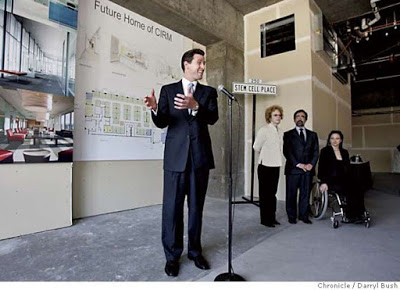 Newsom pushed a $17 million bid for the CIRM HQ
California Gov. Gavin Newsom, long a supporter of the California stem cell agency, today endorsed Proposition 14, the November ballot measure to give the agency $5.5 billion more and save it from financial extinction.

Known officially as the California Institute for Regenerative Medicine (CIRM), the agency is running out of the $3 billion voters provided in 2004. It will begin shutting its doors this winter without a major infusion of cash.

Newsom's endorsement was buried in a news release announcing his stand on a number of ballot measures. It also came on one of the worst days of the week in terms of securing news coverage, not to mention that California news is dominated today by wildfire coverage, among other things.

The news release could not be found on the Internet at the time of this writing. It was forwarded to the California Stem Cell Report by the campaign. The full text of the Newsom announcement concerning the stem cell measure said,

"YES on Proposition 14 to continue funding stem cell research, as well as research and therapy development for Alzheimer’s, Parkinson’s and other neurodegenerative conditions.  As Mayor of San Francisco, Newsom was an outspoken champion of Proposition 71 (2004), which created the California Institute for Regenerative Medicine (CIRM) and made California a global leader in the field."

In 2004, Newsom played a major role in raising a $17 million, successful bid to lure the headquarters of the agency to San Francisco. After its free rent expired a few years ago, CIRM moved to Oakland because of the high cost of space in San Francisco.

Here is the release thanks to the folks at the campaign.

Newsom SUPPORTS Proposition 15, which would reclaim billions of dollars for California’s public schools, community colleges and essential local services by changing the tax assessment of the most expensive commercial and industrial (non-residential) real property to current market value.

Newsom has long endorsed the concept of this balanced “split roll” property tax reform as a matter of fairness, as long as residential property owners and small businesses are protected.

“California, like every state in America, is currently experiencing the severe financial aftershocks of global pandemic,” Newsom said.  “As a result, we’ve seen numerous proposals floated to stabilize our state’s long-term fiscal outlook, to protect our most vulnerable and local communities, and to fund critical programs with new revenue.”

“In a global, mobile economy, now is not the time for the kind of state tax increases on income we saw proposed at the end of this legislative session and I will not sign such proposals into law,” he said.

“I do however support Prop 15 because: it’s a fair, phased-in and long-overdue reform to state tax policy, it’s consistent with California’s progressive fiscal values, it will exempt small businesses and residential property owners, it will fund essential services such as public schools and public safety, and, most importantly, it will be decided by a vote of the people,” he said.

Newsom OPPOSES Proposition 21, which, with some modifications, is similar to the failed Proposition 10 he also opposed in 2018.

“In the past year, California has passed a historic version of statewide rent control – the nation’s strongest rent caps and renter protections in the nation – as well as short-term eviction relief,” he said.  “But Proposition 21, like Proposition 10 before it, runs the all-too-real risk of discouraging availability of affordable housing in our state.”

In addition, Newsom is taking positions on the following measures:

Previously, Newsom had taken an early position on important criminal justice and civil rights measures appearing on the November ballot, including:

Election Day is Tuesday, November 3, 2020.  The deadline to register online to vote is Monday, October 19, 2020, although Californians can register in person to vote up until Election Day.