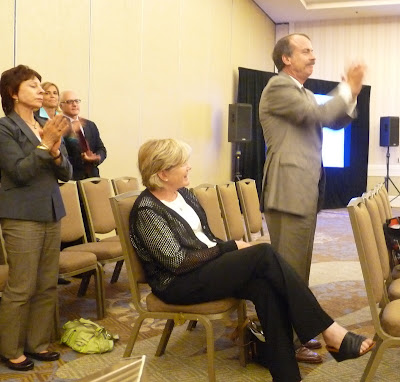 Jonathan Thomas was not in the room late last night when directors of the California stem cell agency voted to elect him to a six-year term as chairman of the $3 billion research endeavor. He was elsewhere in the hotel in San Diego. Directors went on to some minor business as they waited for his return. Shortly after he and his wife were seated in the audience, outgoing Chairman Robert Klein reiterated the vote and Thomas received a standing ovation. In this photo, Thomas is applauding in return. His wife is seated. In the background is Frank Litvack(with glasses), who lost the election for the chairmanship.
Posted by David Jensen at 8:25 AM