​For today’s 10-year anniversary piece in The Sacramento Bee on the California stem cell agency, the agency was asked for statistics and numbers that would be useful in illustrating what it believes is the progress of the program.

The freelance article was written by David Jensen, publisher of this blog. Given the space limitations of the print media, the California Stem Cell Report is carrying all of the information provided by the agency.

Kevin McCormack, senior director for communications, supplied the following, which has been edited slightly for clarity.

“One (graphic) is a pie chart that breaks down all the different disease areas where we are funding research at the most advanced levels, the pre-clinical (or translational as the graphic calls it) and the 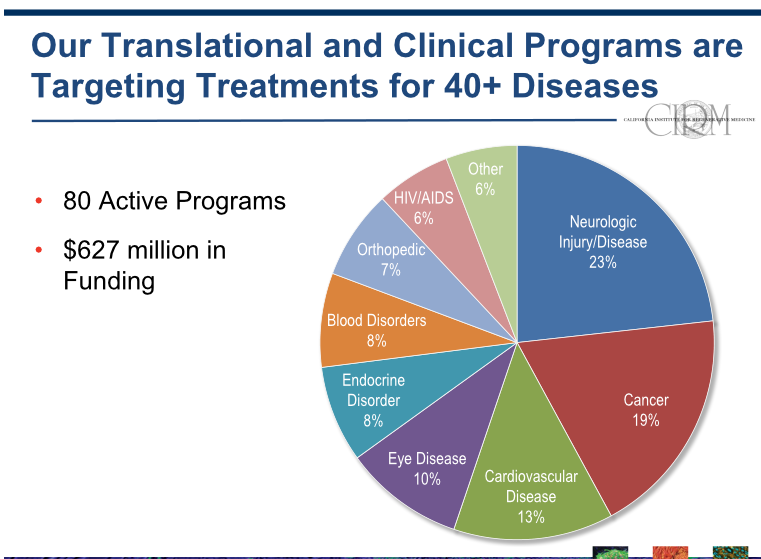 clinical trial level (shown at right).  As you can see this covers 80 different programs and involves $627 million in funding. Obviously a lot of other money goes to fund other projects such as basic research, developing tools and technologies, etc., but I think this is a graphic that people will be interested in because it highlights the areas where we are closest to developing treatments for patients.

“For other numbers here are some that might be useful:
“More than 1,750 published discoveries
“Trained more than 1,500 students for future careers in stem cell research
“Lured more than 130 senior scientists, and their teams, to California
“Research facilities helped leverage $543 million for the state
“Generated more than $280 million in new tax revenues by the end of this year
“Generated more than 38,000 job years by end of 2014

“The second item is our Ten @ Ten list (10 clinical trial investments after 10 years) which shows the ten clinical trials we're funding right now. It's actually a little (off) because we have only been funding research for seven years – it took a couple of years after Prop. 71 was passed for us to get through the legal challenges and set up the infrastructure for the agency, etc., before we began funding – but Ten @ Ten has a much nicer ring to it.

“We also funded research that led to six other clinical trials and you can find out information about them here:
http://www.cirm.ca.gov/our-progress/cirm-funded-clinical-trials

“In terms of money there are probably a few things to mention, and as always it gets a little complicated. So far the Board has awarded $1.9 billion in funding but only $1.4 billion has actually been spent. When you talk about our accomplishments to date, as I am sure you will, the $1.4B is the most accurate number to use because it reflects what has gone out the door and been used for research.

“We also estimate that we'll be able to recover around $100 million of the money that has been awarded through cost savings on projects and on projects that have been cancelled because they failed to meet their milestones. So, if you add that to the $843 million that we still have left to award that means the Board has close to $1 billion left on hand for funding. And that means that, at our current rate of spending, we'll be able to continue funding new projects until 2020, and because those are multi-year awards we'll be continuing to supervise that funding for several more years after that date.”
Posted by David Jensen at 8:59 AM