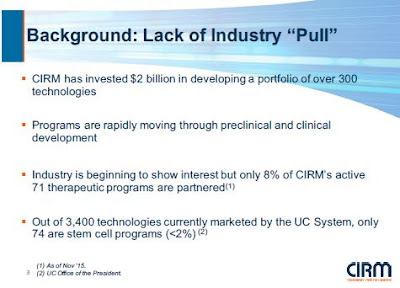 California is hoping to fire up the state’s stem cell industry this month with $105 million aimed at creation of an unprecedented, “industrial stem cell therapeutic powerhouse” on the nation’s West Coast.

The money is coming from the state’s stem cell agency, which has already spent $2 billion on stem cell research in the last decade. The agency is now on its last $900 million and pushing hard to translate stem cells into therapies and cures. It is expected to run out of money for new awards in 2020.

Earlier this week, a key panel of the agency’s governing board approved the $105 million surge, a decision that is certain to be ratified by the full board at a meeting Dec. 17 in Los Angeles. The action will initiate a 2016 competition for the cash, which is likely to draw national interest, although the money can be spent only within the state.

The largest component of the $105 million is $75 million for a program that the agency has dubbed the “Accelerating Therapies through Public-Private Partnership” or ATP3. The award would be one of the largest ever made by the agency, which is formally known as the California Institute for Regenerative Medicine (CIRM).

Under the ATP3 public-private round, the recipient would be required to match the $75 million from California taxpayers. The program would bundle together for continued CIRM funding the most promising current CIRM projects. Those projects -- a “portfolio of  ‘high risk’ but high reward projects” -- would be selected by the recipient for development for commercialization, the agency said in a memo.

CIRM’s plan for the project said,

“The aggregation of a basket of otherwise unpartnered CIRM projects offers the successful applicant ‘multiple shots on goal.’ This increases the probability of successfully developing and commercializing a stem cell treatment and makes significant industry investment in stem cell technology more attractive.”


The agency said in a presentation that industry is “beginning to show interest” in stem cell therapies but only 8 percent of CIRM’s 71 active therapeutic programs have industry partners.

CIRM’s presentation said the awardee must have a “top-tier” track record and “could be an established company, a spin-off or a new company with a team formed by Pharma, biotechnology or by an investor.”

CIRM said Californians would benefit from "creation of an industrial stem cell therapeutic powerhouse that increases the likelihood of the commercialization of stem cell treatments for patients with unmet medical needs."


The other CIRM award rounds that are up for ratification later this month aim also at bringing stem cell therapies into widespread use.