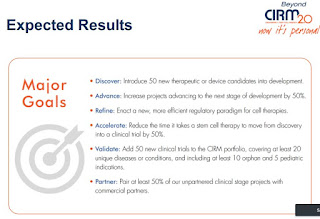 LOS ANGELES -- Directors of the California stem cell agency this morning approved an $890 million plan for the next five years as it surges forward with a risky and ambitious effort to build an “industrial stem cell therapeutic powerhouse” in the Golden State.

The agency proposes 50 new clinical trials on top of 15 already underway. Next year it expects to set up a $150 million partnership with private investors to turn research into cures. Investors would have first pick of the best research that CIRM has to offer that currently lacks a partner.

Other ventures and goals for what could be the agency's last five years of life include:
Directors of the agency, formally known as the California Institute 71 for Regenerative Medicine (CIRM), approved the plan unanimously at a meeting here. (Here is a link to its press release.)

Arlene Chiu, former director of CIRM's scientific programs and now with the City of Hope, told the agency board that the plan was audacious and bold. CIRM board member Sherry Lansing, former chair of the UC board of regents, praised the plan's "sense of urgency."  Another board member, Steve Juelsgaard, former executive vice president of Genentech, said the plan contained projects that he had never seen before in the biotech industry.

Asked for comment, CIRM board member Al Rowlett, who is chief executive officer of the Turning Point mental health program in Sacramento, said,


“It’s ambitious, but then isn’t that what the people of California were when they approved Proposition 71. They wanted to create something that was going to change the face of medicine. That’s what we hope to do….”

Proposition 71 was the ballot initiative that created the $3 billion agency in 2004. The campaign led voters to believe stem cell therapies were close on the horizon. None has been produced, and the agency's state bond funding is expected to run out in 2020.

CIRM directors later today will be briefed on a $30 million “wind-down” plan that has attracted $7 million in private donations. More funding is being sought. One source may be the state legislature.

The agency’s plan for the next five years says it would benefit the people of California by creating  “an industrial stem cell therapeutic powerhouse that expands the tax base, adds high quality jobs and increases the likelihood of the commercialization of stem cell treatments for patients with unmet needs.”

Randy Mills, CEO of the agency since May 2014, said the plan was devised to have "the greatest possible impact for our patients. We didn’t want something ‘good enough.’ We wanted something transformational."

He acknowledged the risk and size of the task, which he said is aimed at transforming regenerative medicine. But he remains optimistic that the agency’s tiny team of about 55 persons can pull it off. He gave his team full credit for developing the spending proposal.

The CIRM plan calls for spending $620 million on clinical work and “translational” research, which is aimed at taking basic discoveries beyond the most preliminary stage. Basic research would receive $170 million. Educational programs total $50 million. Another $50 million would go for “infrastructure.”

One of the riskier elements of the proposal may be the agency’s plan to offer $75 million to private investors to begin a partnership in which they would have access to the best of the CIRM-funded research that doesn’t already have a private partner.

The investors, who could be a Big Pharma firm, an existing smaller company or venture capitalists, would have to add $75 million of their own money. The agency would also continue to support the selected research, thus minimizing the risk to the private investors.

For months, Mills has been commenting on the reluctance of private investors to engage in stem cell therapy development, which is expensive and novel. “De-risking” is important in attracting business interest, Mills says.

Competition for the $75 million is scheduled to begin behind closed doors early next year. But questions have been raised about the risk that no private investors would find any CIRM research attractive.

Gregory Bonfiglio, managing partner of Proteus Regenerative Medicine, a Portola Valley, Ca., a venture capital firm, said in an interview, however, such efforts by the agency are long overdue.

Another important element of the plan involves creation of accelerating and “translating” centers, funded at $15 million each, beginning next year. The agency is also likely to expand its Alpha Clinic effort, which is aimed at providing one-stop treatment centers.

The translating and accelerating centers would work with the Alpha clinics and other researcher to provide much of the “backroom” work needed to negotiate federal rules and regulations and win ultimate approval of a therapy.
Posted by David Jensen at 11:24 AM

Looking for a job with an exciting and unique $12 billion stem cell research funding organization in the Golden State of California.? The s...