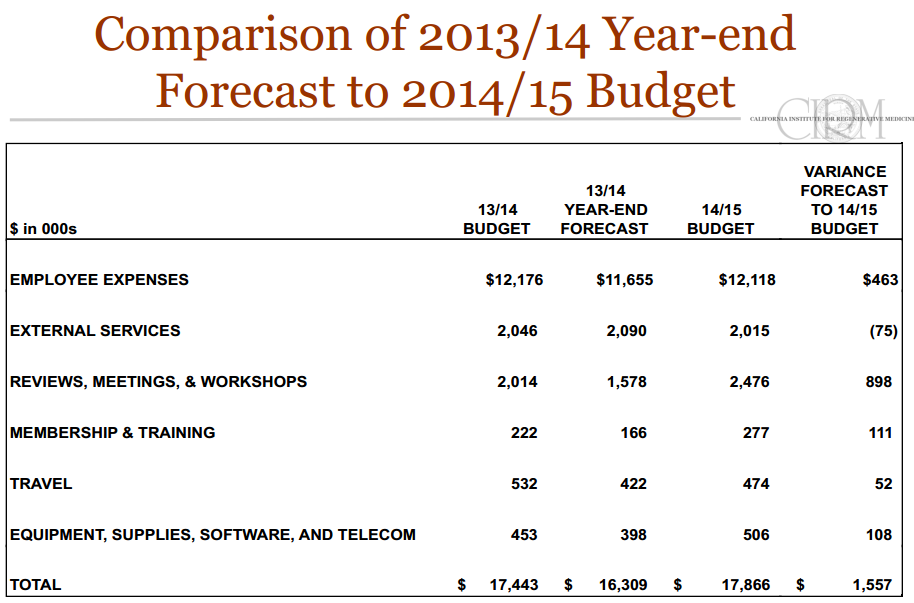 The new president of the California stem cell agency, Randy Mills, will take a crack at the agency's proposed, $17.9 million operational budget before sending it to directors for approval later this month.

The budget represents a 9.5 percent increase over estimated spending for the current fiscal year, which ends June 30. Mills has not yet had a chance to put his stamp on it. He was appointed as CEO of the agency on April 30. He will assume his responsibilities on Thursday.

The spending plan was examined this afternoon by the CIRM directors' Finance Subcommittee, which is chaired by Stephen Juelsgaard, former executive vice president of Genentech. It was Juelsgaard's first meeting as chairman of the panel, and he systematically sought explanations for a number of items that had large dollar or percentage increases.

The budget did not come to a vote by the committee. Juelsgaard said it needed a review by Mills to see if he wants to make changes prior to submitting it to the full board May 29. Mills has given no public indication of whether he might make substantial changes in the agency's operations.

There was little discussion of a new, $600,000 item in the agency's budget for rent costs beginning in November 2015. The agency loses its free office space Oct. 31, 2015, and is facing the task of finding a new headquarters in a sizzling office market in San Francisco. However, it was noted that the $600,000 figure could change as CIRM becomes more deeply enmeshed in a search for new space.

Currently the agency has 19,500 square feet for 56 employees. The value of the current lease was placed at $1.2 million annually as of June of last year.

“The assumptions for the $600,000 are that we will have a smaller space in a less trendy neighborhood, and while it would be lovely for employees to get free parking, it's not something that we are counting on.”

Parking in San Francisco is scarce and expensive. The public parking lot in the CIRM building charges $3.00 for every 20 minutes for ordinary customers.

During the examination of the budget, Juelsgaard raised questions about which expenses fall within the legal cap on operational spending. By state law, CIRM can spend no more than 6 percent of its grant total on its operational budget with the exception of legal expenses.

Juelsgaard and Jeff Sheehy, another CIRM board member, both questioned whether spending for BayBio and Biocom, biotech industry organizations, could be justified as legal expenses and thus be exempt from the limit, according to the terms of Proposition 71. That measure is the 2004 ballot initiative that created CIRM. The staff indicated those expenses would be moved out of the budget for the legal office and into another area.

Sheehy said that if CIRM has, in the past, placed such spending in the "legal" category it should retroactively correct that. Legal expenses for the coming year are budgeted at $1.9 million, including $711,200 for outside contracting, compared to $2 million for the current year.

Juelsgaard also asked about expenses in a category called “reviews, meetings and workshops,” which totals $2.5 million. It is the second largest spending category in the budget, falling behind compensation, which is expected to total $12.1 million.

The category includes $300,000 for a conference involving hundreds of CIRM grantees. The agency did not stage such a conference last year, but has in previous years. The CIRM staff also noted that grant review meetings can cost up to $150,000. Some of the closed-door sessions last two days. All of the scientific reviewers are scientists from out-of-state, including some from overseas. The agency has nine reviews scheduled for the coming year.

Today's budget session involved new figures for the estimated spending for the current year, which alters the budget increase reported in an item Friday on the California Stem Cell Report. The earlier increase was based on calculations based on what then were the latest CIRM estimates for its current spending.
Posted by David Jensen at 8:00 PM