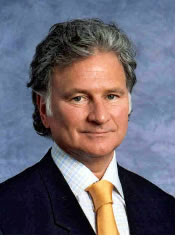 The California stem cell agency's plan to offer an ambitious loan program to the stem cell industry was discussed on Tuesday during a meeting in San Diego with teleconference links to elsewhere in the state.

John M. Simpson, stem cell project director for the Foundation for Taxpayer and Consumer Rights, attended the session. We asked him for a report on the event. Here is what he sent.

"CIRM's Biotech Loan Task Force voted unanimously on Tuesday to hire PriceWaterhouseCooopers as consultant for $50,000 to report on loan programs from other states and to offer a model of how the California program could work including rates of return that might be expected.

"PriceWaterhouseCoopers were the consultants that helped CIRM develop its strategic plan. Task force Chairman Duane Roth (see photo) said CIRM had checked with three consulting firms and had proposals ranging up to a cost of $350,000.

"But the primary purpose of the meeting was to hear views of executives of the companies that might apply for loans.

"Roth said that the motive for the program from CIRM's perspective is that it "is a way to recycle money and fund more research."

"Over the course of three hours the executives and the committee members discussed various ways the program could be implemented.

"Adams said his company was very interested in a loan program and thought it could help products through the so-called "Valley Of Death," a reference to a promising scientific discovery that fails to make it to the clinic because of a lack of funding. He added that with current economic conditions "the Valley of Death has become more of a Grand Canyon of Death."

"A consensus emerged that a loan program should focus on translational research, not basic science.

"Roth suggested that a company would be able to apply for a loan tied to a specific product or for a company loan. If it was tied to a product and the product failed to be developed, the loan would be forgiven. Such a loan would carry a higher rate of interest than one tied to a company.

"Committee Member Ted Love urged that however the program comes together, "We should be starting out simple."

"CIRM President Alan Trounson told the meeting by telephone from San Francisco that the loan program should be built into various Requests For Applications (RFAs) that are called for in CIRM's strategic plan. There should not be a separate RFA for loans.

"Roth said he envisioned loan applicants applying under CIRM's usual RFA process and then submitting applications for peer review. Loans would be offered only after the application had been judged on scientific merit.

"ICOC Chairman Bob Klein asked if a loan from CIRM could serve as validation" of a company's efforts that would increase the possibilities for additional funding. The executive panel agreed that it would, perhaps with the most benefit to a public company.

"Committee members also wrestled with the fact that CIRM is limited by law to a maximum of 50 employees. That will make it difficult to administer a loan program in-house, they agreed.

"Klein suggested that CIRM follow the model of the housing industry and like "Fanny Mae" use "designated underwriters" to do the nitty gritty work of loan administration.

"Roth said he hoped to have the PriceWaterhouseCoopers report in March and hoped to offer a loan policy for ICOC consideration by June.

"After the meeting in a brief interview Klein suggested that the program might start simply with two RFAs -- perhaps Disease Team Research and Research Tools. He expected both would be offered in the fall.

Here is Simpson's commentary on the meeting:

"A loan program an intriguing idea, but the devil will be in the details and I'll continue to monitor them as they emerge. It's too early to know if FTCR will support the final program or not.

"From a policy making point of view, they are going about this the right way: gathering facts from stakeholders and discussing ideas in public meetings.

"Duane Roth should be commended for the way he is running the committee and the executives deserve thanks for participating on Tuesday."