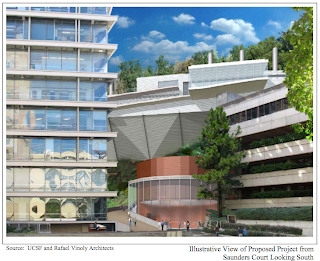 California's young stem cell agency has extracted promises of nearly $500 million in matching funds to help build what it calls one of the most ambitious medical science lab construction programs in the nation's history.

The agency announced today that the 12 competitors for $262 million in CIRM lab construction grants said they had raised the matching dollars in an effort to win the grants in May. The agency will give higher priority to institutions with larger matching funds.

The largest single "matching and leverage" amount -- $150 million -- came from Stanford, which is seeking a $50 million grant from CIRM. The San Diego Consortium for Regenerative Medicine, which consists of UC San Diego, Scripps, Salk and Burnham, offered $65 million for its $50 million grant request. UC San Francisco logged in with $54 million for a $40 million grant for its building(See photo. Larger version here).

Interestingly, UCLA came up with only $12 million matching for a $30 million request. UC Irvine offered only $23 million for a $37 million grant. (A table with the complete list of the grant requests and size of matching is available here.)

In a news release, CIRM Chairman Robert Klein said the total of about $758 million (including leverage and grants) can mean "a research infrastructure building program that historically exceeds any prior state government research facilities program for a new field of medical science anywhere in the U.S."

"The research facilities established by the CIRM Major Facility Grants will provide a safe haven from federal government restrictions for stem cell scientists to conduct research that will lead to therapies and cures for millions of patients who suffer from chronic disease and injury. These grants are an important part of the CIRM’s goal of making California an ideal environment for all avenues of stem cell science to flourish."

However, none of the labs are likely to be built before a new US president changes George Bush's restrictions on stem cell funding. We understand there are other concerns about federal restrictions and have queried CIRM concerning those.

While the sums for lab construction appear vast, some of the applicants may be disappointed. The total amount of grants requested is $336 million, exceeding CIRM's budgeted $262 million by $74 million.

Earlier this year, Klein said he might ask some of the institutions to reduce the size of their requests in order to fund all of the building programs.

CIRM's Facilities Working Group is scheduled to review the applications April 4 and 5 with its decisions going to the CIRM directors for ratification May 6-7. CIRM directors have already ratified the decisions of the scientific reviewers on the grant requests.

The latest applications are scheduled to be posted on the CIRM website sometime in the future. We have queried CIRM concerning that date.

(Our figures on the totals in the grant program differ slightly from those in CIRM's press release. We have based ours on the cumulative totals of the raw figures and then rounded.)
Posted by David Jensen at 2:16 PM

Editor's note: The following item was written by the producer of the  California Stem Cell Report  and   appeared last week  on the  C...