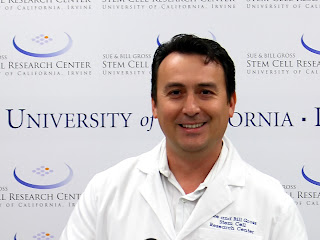 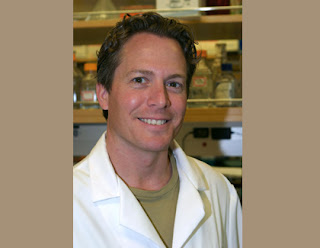 The University of California, Irvine was quick today to put out a news release on its role in development of the Geron therapy that is now moving into history-making clinical trials.

The school headlined the release: "UCI behind world's first embryonic stem cell study in humans." And it said,

Specifically mentioned were Hans Kierstad (see lower photo) and Gabriel Nistor, who published their work in 2005, generating considerable international attention. Kierstad's smiling face dominated the entire home page of UCI today. We asked Nistor to send us a photo which is at the top.

The release also noted that UCI has received more than $52 million from the California stem cell agency. It did not mention that Susan Bryant, vce Chancellor for research at the UCI School of Biological Sciences, and Oswald Steward, director of the UCI Reeve-Irvine Research Center at the campus, sit on the agency's board of directors.
Posted by David Jensen at 11:41 AM