Thanks to the taxpayers of California, the Golden State is now home to the largest publicly available stem cell bank in the world.

The state’s $3 billion stem cell agency this morning announced that the bank, located in Marin County north of San Francisco, is open for business.

The project is backed by $32.3 million from the California Institute of Regenerative Medicine (CIRM), as the agency is formally known.

In a news release this morning, CIRM said the bank is “offering the first 300 different stem cell lines for researchers interested in gaining a deeper understanding of, and developing treatments for 11 common diseases and disorders.”

The agency said the bank, housed at the Buck Institute in Novato, is collecting samples from as many as 3,000 donors. CIRM said,

“Those samples will then be turned into high quality stem cell lines – known as induced pluripotent stem cells or iPSCs – which are available to researchers throughout California and the rest of the world.”

“We believe the bank will be an extraordinarily important resource in helping advance the use of stem cell tools for the study of diseases and finding new ways to treat them.”

As of this writing, the announcement had received coverage on the San Francisco SFgate Web site and on other sites in the San Francisco Bay Area that are owned a news media chain and another site in Pennsylvania.  The coverage is likely to grow throughout the day, which is important to the agency. It is hard-pressed to generate news coverage for its achievements.

The bank was funded by awards from California in 2013 and is operated by the non-profit Coriell Institute of Camden, N.J.  Generation of the cells is performed by Cellular Dynamics International, Inc., of Madison, Wisc.

CDI was formed by stem cell pioneer research Jamie Thomson of the University of Wisconsin. It was sold to Fujifilm of Japan earlier this year for $307 million at double its stock price.


Here are links to the press releases at Coriell and CDI. Here is a link to a summary of the CIRM banking initiative and a link to a progress report on the effort. Below is a list of participants and amounts of awards. Click on it to see it in a larger format. 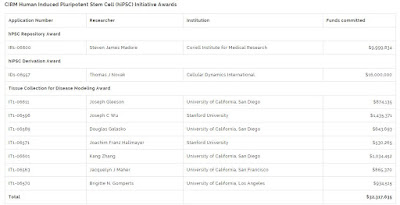